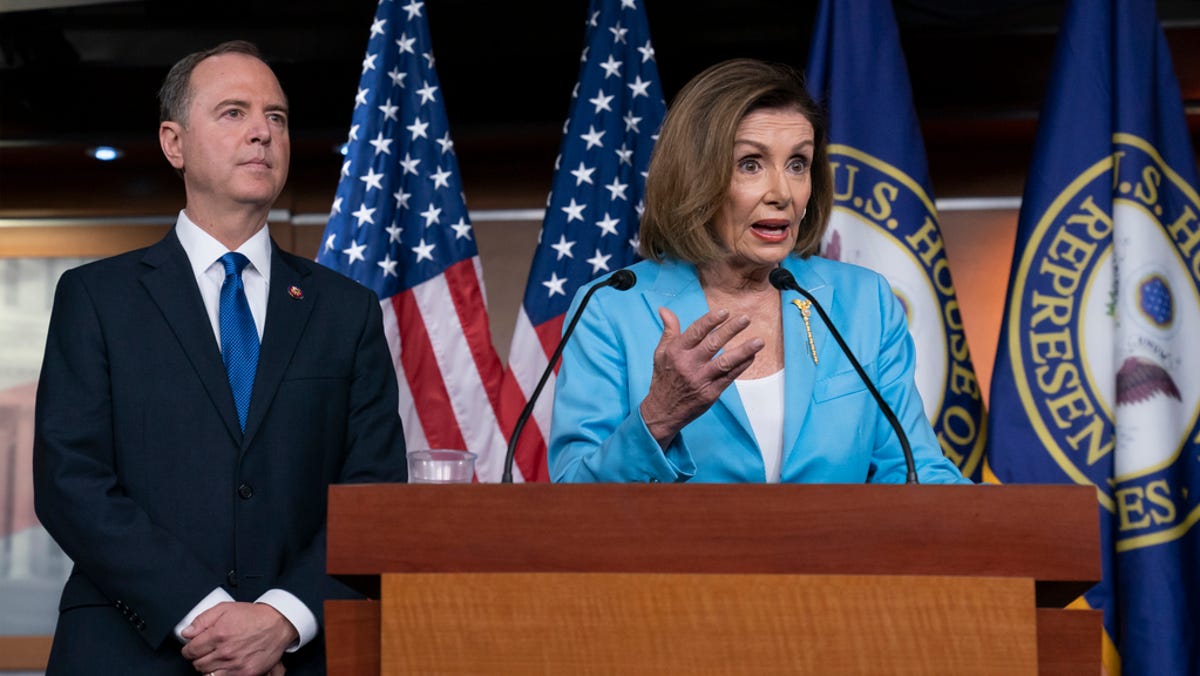 My wife Angie will tell you that I study history and world events fluently every day. I have studied China for many years. To get answers I need to question, I call many I know in Washington on Capitol Hill (from my tenure on two Presidential campaigns and Presidential talks) and I ask them for straight-up answers to better understand what affects us as a nation.
Well, in 2016 America elected a new Sheriff: Donald J Trump. For decades the Chinese walked all over America but the new President said: “not anymore”. Trump literally strangled China’s economy to the point their economy was in its worst free fall ever. Trump negotiated a new 50 billion trade agreement. He had Xi by the proverbial balls.
America’s economy was on fire and unstoppable. President Xi Jinping knew he could not beat the USA militarily and he knew any domesticated economic attack would fail as our economy was too strong. He had to act. But how?
Enter the USA democrats led by Pelosi and Schiff.

Impeachment. A hoax. A distraction for our people and President. Xi Jinping and his thugs see this. They aren’t stupid. They have very intelligent intellectual thinkers in their government. Now you must understand, the Chinese regime is truly Barbarians. Notice I did not say ALL CHINESE. Chinese people are good people. I enjoy my interactions with them.
The communist regime has millions of its own citizens slaving in gulags simply for speaking against the government or openly practicing Christianity. Knowing they could not attack us openly they needed to be coy, like a deceptive fox. In my opinion, I believe the regime released a biological weapon upon the world that doesn’t kill everyone but kills “enough,” especially the elderly and in-firmed. Back in WW2, Hitler thought the same way. He got rid of what he considered the useless and rejects of society.
Trump’s task force uses models to figure things out. Xi used and uses “models” too. China’s president figured that if he killed a few of his own (a few hundred thousand to them would be a few out of 1.4 billion people) and spread the virus to other nations (especially to the USA) they would “level the economic playing field” and not have fired a shot.
Losses of his own people were acceptable costs of a new war.

When China’s own doctors attempted to sound the warning, they were immediately silenced. In fact, one died and another has simply disappeared. Trump and the other allied leaders indeed KNOW this is what happened. They have under-reported their own deaths. Trump knows he cannot outrightly seek retribution. His news conference today showed me this when he balked publicly about no outright retribution over Xi’s handling of this and he immediately brought up the “trade deal”. However, Trump wasn’t being weak, he too was now being coy. We know this was a biological weapon. The food market story is bullshit.
Xi knows we know it. Trump also today announced he sent two battle groups of destroyers and other ships to sea several days ago to fight drugs and rogue actors like Iran should they try anything.
I say he did this to show Xi he knows what has transpired (we have the greatest intelligence assets) and that they (the Chinese) should rethink further action. Politics is premier. We cannot overtly attack China for what they have done as we would also suffer greatly. We all know this.
But China has temporarily achieved its goal. America was literally consumed by Trump’s phony impeachment brought by the ultra-left democrats (supported by democrat rank and file and one Republican Mitt Romney) and Xi Jinping saw an opening. He took it. Xi did what Trump usually does..he walked onto the world stage and threw a grenade into the “room” and left. It exploded in the form of this worldwide pandemic. It brought the USA and the rest of the world to its knees and leveled the economic playing field
Our economy is now near depression. Xi didn’t fire one bullet. Trump needed to up his game of chess and putting our Naval ships to sea was his next move He said he is a “war” President. He is.
But now on not one but two fronts. One front is the virus and the other front is the Chinese. While the Saudi’s and Russians are screwing with oil prices they aren’t overtly doing what this pandemic is doing. The drug smuggling story for dispatching the Naval Force is bullshit and the world knows it. I am of the opinion Trump can indeed bring us back from this catastrophe albeit with a changed playing field.
But Trump is a genius in chess and financial matters. He’s become a champ at international politics too. I am sure Trump can once again lead the economy to even stronger strength and greatness that it was. He can do it quickly, I’m sure of it. He has proved it. Xi Jinping needs to be sent a message loud and clear. NEVER AGAIN. We need to bring all of our critical manufacturing back from China beginning with our medicines they were recently threatening to withhold. We can do it immediately. Again, another reason for Trump putting to sea such a sizable Naval Force. Sending a clear message.
We all must ride out the next few weeks. Then we and the world pick up the pieces and move on. The democrats who have given Xi this opening wrapped in a bow must pay a heavy price in November as they (the democrats) truly have cost and continue to cost America precious lives by the phony scandals. Nancy Pelosi continues to help the Chinese by her daily shameless attacks upon the President and meddling in stimulus packages as she did this last weekend. Yesterday’s statements she made were truly appalling and the lowest of low. I didn’t think she could go any lower. What a disgrace she is to our nation.
But, Pelosi aside, make no mistake, China must and will be taught a lesson the likes they have never seen before and Trump is the man to pull the trigger.
We the people must teach the democrats the same lesson at the polls. They (the radical wing of the party) are the enemy of a free America. I am certain of it. The entire democrat party of our forefathers is dead. Remember people, Trump indeed tried to warn us all of the Coronavirus in his State of the Union Speech. He spoke of it. He said he was on top of it.
After he spoke, Nancy Pelosi ripped up the speech calling Trump’s words “a manifesto of lies”. She disgraced the country and all of our fellow honored citizens present in the House Chamber. Well, she now has American blood on her hands. She is very majorly responsible for these needless deaths as well as the Chinese. Her and Adam Schiff.
The left and democrats laughed as she tore up his speech. Well, as they laughed the disease he just spoke of in that speech came to our shores. Republicans and Democrats alike are now dying. Your family members and mine. Our grandparents and middle-aged citizens alike. Our liberty is for the most part suspended. As we bury our dead (without proper funerals) from this calamity let’s drive the nails into the coffin of the Democrat party as well in November.
It’s time people. Stand up for your rights and your country! Our Liberty and survival are at stake!
I am praying for God’s blessing on our nation. But, God also gave us the ability to think for ourselves and it’s time we placed blame for all this death where it belongs: on the doorsteps of Nancy Pelosi, Adam Schiff, and Xi Jinping directly.

Wake Up America. WAKE UP!