HERE’S HOW JOE BIDEN WILL CHEAT IN THE DEBATE! 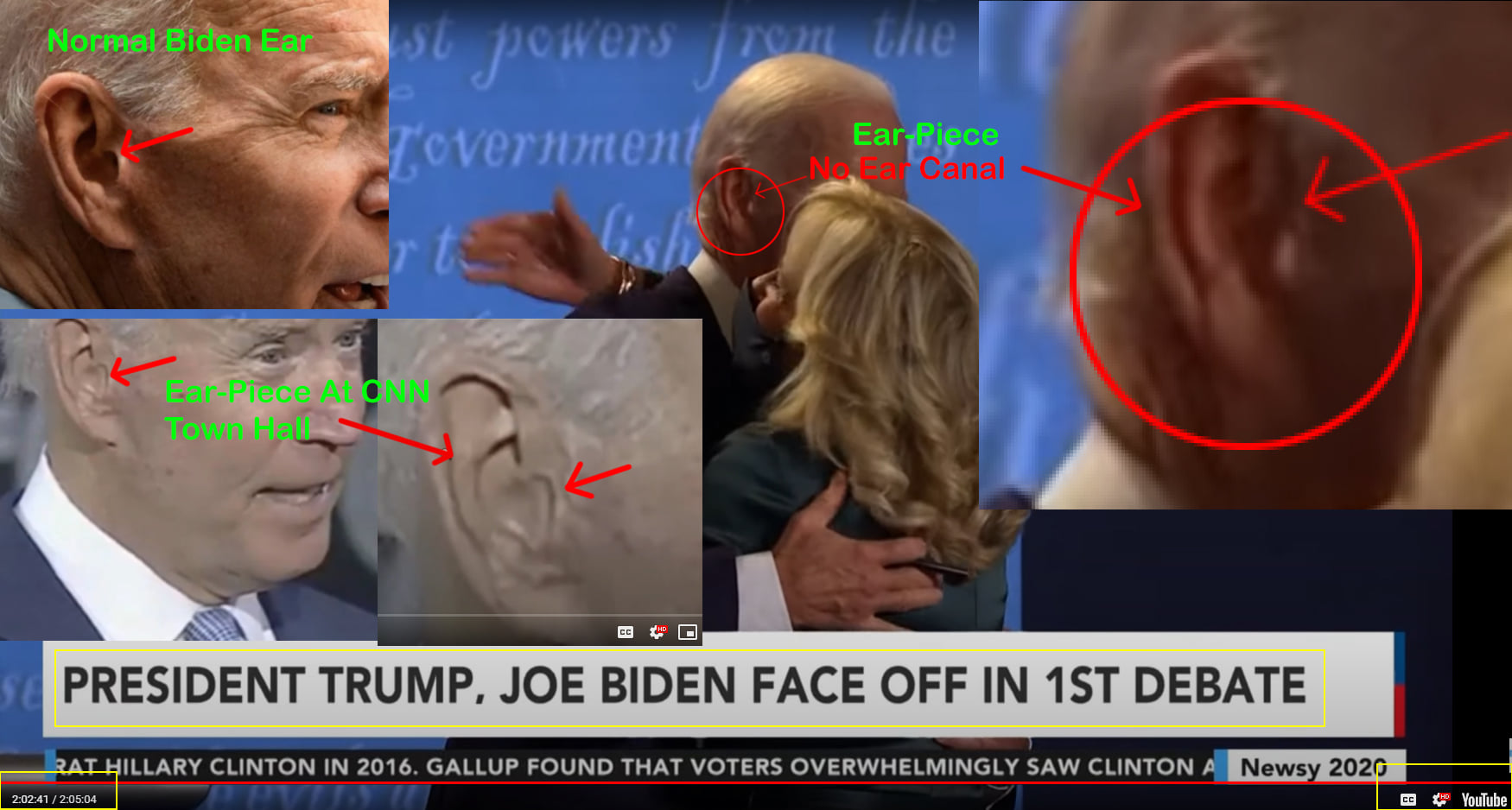 Color me surprised. I’ve been predicting for months now that Joe Biden would bail out on the debates, due to his inability to string two sentences together without a teleprompter. But it now looks like Biden will attend the first debate tomorrow night. His team has figured out a technological workaround to help control him in public appearances and keep up the charade that Biden has most of his faculties.

After all the years that I worked in TV news, I’m kind of kicking myself that I didn’t spot this trick earlier. Keep in mind that Democrats are willing to do just about anything to cheat in a presidential election. This includes grade-school level cheating, such as then DNC head honcho Donna Brazile handing CNN’s debate questions to Hillary Clinton prior to the debate. But it also includes much more sophisticated, technological methods

Think back to the first debate in 2016 between Trump and Crooked Hillary. That’s the debate where she wore the red pantsuit that she stole from Kim Jong Un’s wardrobe. Literally everyone on the right noticed the square box under Hillary’s jacket that was taped to her back, and the wires running up toward her head.

The device sparked a lot of theories about what it was, with some thinking it was some type of medical device to control Hillary’s seizures. But having worked in TV for so many years, I instantly recognized it, because I used to wear one at work every day. It was a power source and wireless receiver for Hillary’s IFB (her earpiece). Someone within close enough proximity was able to relay information to Hillary during the debates to make it look like she just has so many obscure facts and figures floating around in her big brain.

The funny thing is: Trump knew. If you re-watch that first debate, when Trump shakes Hillary’s hand at the very beginning, he reaches over with his left hand and taps Hillary on the back – directly on the wires. He was signaling to her, “I know you’re cheating, you wretched villain, but I’m going to beat you anyway.”

After that first debate, the media went out of its way to not do any close-ups on Hillary from behind, because everyone knew she was wearing a gadget to help her cheat.

Fast forward to 2020, and here is how Joe Biden’s team plans to cheat. They’ve already tested this method out in several public appearances. Is Joe Biden using a teleprompter part of the time? Yes, absolutely. We’ve all seen it. He’s using handwritten notes, a teleprompter, his computer screen and any other resource they can to prop him up and make it look like he’s not a really old man with really bad Alzheimer’s.

But this… this is an inspired piece of evil genius. This is going to sound like something out of a science fiction movie but bear with me. This is totally real, and I’ll prove it to you.

Joe Biden has a medical device implanted in his skull.

It’s called the Esteem Hearing Implant which you can learn about HERE. It’s an implant that goes into the skull above the ear and it has two micro-wire probes that are injected into the nerves inside the ear canal. It’s FDA-approved and it uses bone conduction to enhance hearing (sound waves vibrate off the bones of the skull, and the wire probes send the signal directly into the ear, basically). It’s wireless and it’s controlled by the push of a button, so the user can turn it on and off with a little device… that fits in your pocket.

And that’s how the experts at Bombards Body Language spotted this trick. Joe Biden gets really addled during unscripted, public appearances and interviews. It happened during the CNN Town Hall recently. When someone starts talking to Joe Biden, there are times when he gets that “addled old man” expression of sheer terror and confusion on his face. He’s totally lost and doesn’t have a clue where he is or what’s happening.

But then – every single time – Joe Biden does what he’s been trained to do in these situations. His right hand goes into his pocket. Then he smiles that big Joe Biden politician smile that we all recognize after 47 years of this guy being in office. Then he answers the question.

When Joe Biden gets confused, he reaches into his pocket and turns on the implant. Whoever is talking to him on the other end instructs him to smile and then starts relaying answers to him until he gets back on track. Joe hears it because the implant receives a wireless signal and vibrates the bones in his skull.

The body language experts have also noticed that whenever Biden is receiving instructions through the implant, he cannot make eye contact with the person asking him a question. This is a natural response. Even a young, healthy and spry young mind like Donald Trump’s cannot receive communication input from two sources at once. Joe Biden has to look away from the speaker in order to listen to his handlers, which is why he always looks down when he’s being asked a question. He’s not thinking or listening intently; he’s receiving instructions from his handlers on which set of talking points to rattle off.

Now we know. And now you know what to watch for during the debates. If Joe Biden looks terrorized and completely lost and confused, he’ll reach into his pocket to turn on his skull implant and then he’ll smile. Every time. We also know why Joe Biden completely vanished from the campaign trail during July. He wasn’t just hiding in his basement. He was getting his implant installed and recovering from surgery.

The War on White People

The War on White People